A fusion of Art and Technology

Back in late 2015 we decided to create a design study for the MG marque. The aim was to create a 2 car design strategy for the future of this charismatic car company:

Car 1. To create an MG sports car design that would compete with the current crop of compact affordable sports cars such as the Mazda MX5, Fiat 124 and Toyota GT86 etc. This would be a car that would speculate about how a hypothetical MG sports car in 2016 would look – and act as a foundation platform for the second car which would speculate for the future evolution of the MG design language…

Car 2. The second car design would be much more conceptual, blue-sky thinking and similar in ethos to the Porsche Mission E (in relation to the 911) etc and generate an evolution of the design language and drivetrain from the 2016 car.

We set to work creating the first car and our strategy was to generate an MG sports car that was right for now (2016), so that we could establish a current design language and then this can be evolved itself to produce the second design. To us it was critical to create a conceptual design for ‘here and now’ and establish a link to the designs of the past and pointing towards the designs of the future. Then the future designs would be able to throw radical ideas into the area and still be linked to what we have established as key MG design elements.

Ian Webster is our automotive designer and believes that, ‘Any new design should reference MG's past but not be a retro design - i.e. contain the inherent MG spirit but with a modern and individual character. It was important to me to provide a design that could be used as a stepping stone for the future design language of the marque and be pointing to the future as well as referencing the past. In my opinion you also need to create a design that looks as if it could trace it’s design DNA back to those original designs, but with 30-50+ years of evolution - Look at say an Aston Martin DB5 compared to a DB7 or DB9 for example.’

Our aim with this first design was to create a design that would be able to go head to head with current designs of the time such as the MX5, Z4 and Fiat 124 etc. With extensive research in MG’s past, significant contributions by enthusiasts from the MG Owners Club and a whole heap of work we created the 2016 MGE concept that you see below.

Once we had created the first design and established a design language legacy to build from with the more radical second design, we began to generate some exciting concept sketches – However, in April 2017 we heard that the Chinese MG design studio was now creating its own sports car concept design for the future. We don’t want to step on any ones’ toes and have decided to put our second concept on indefinite hold.

The MG E-Motion design team have grasped the design baton, run with it and created a sports car concept with a very progressive attitude. It was great to see the side elevation sketch revealed many of the inherent elements that we defined as being part of a contemporary MG design language. In the E-motion features such as a tapering wing profile, smooth fastback roofline, metal grille and round headlights are gently echoed and then the haunched hindquarters of the MGA are added for good measure.

The Chinese MG design studio praised our design study and if our concept MGE has helped encourage SAIC to take MG back into the sports car market then we are very pleased and we wish them well with their new venture – Which now looks very exciting. 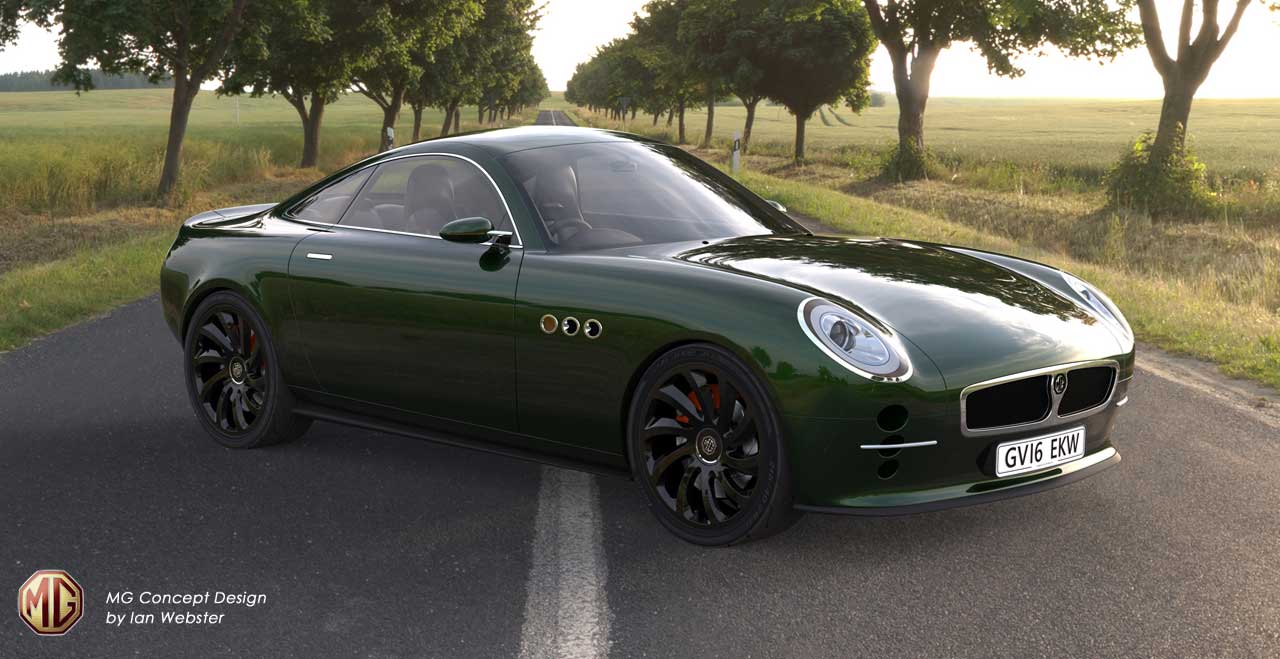 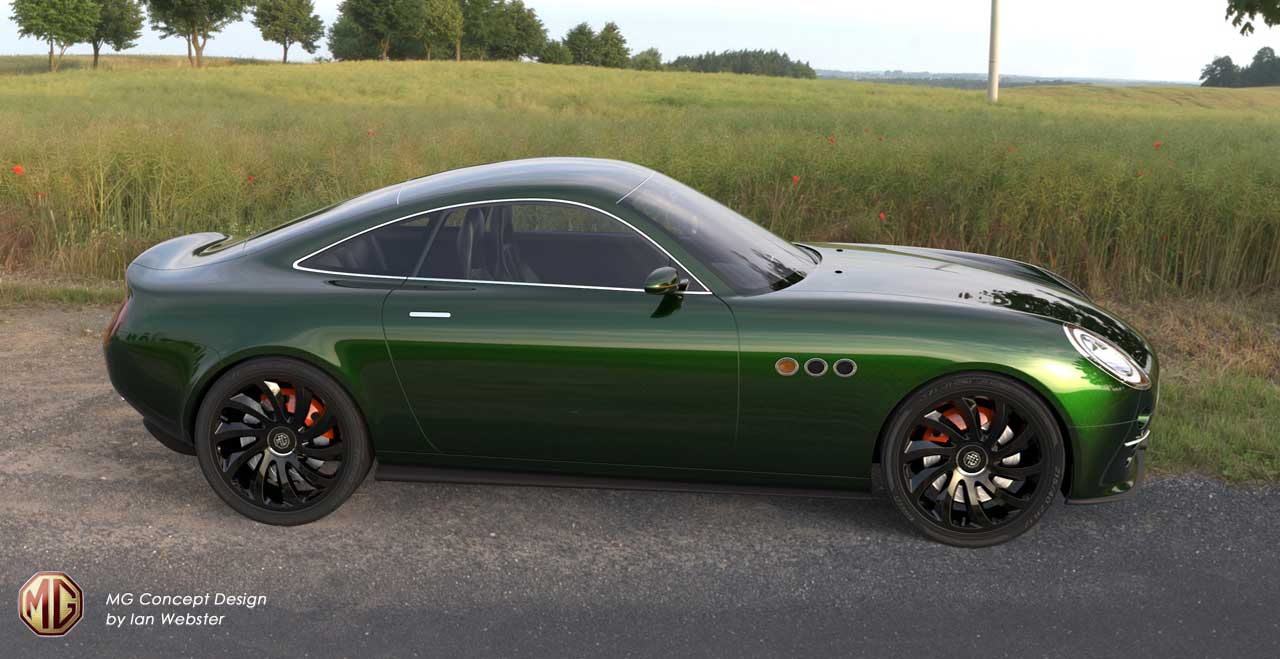 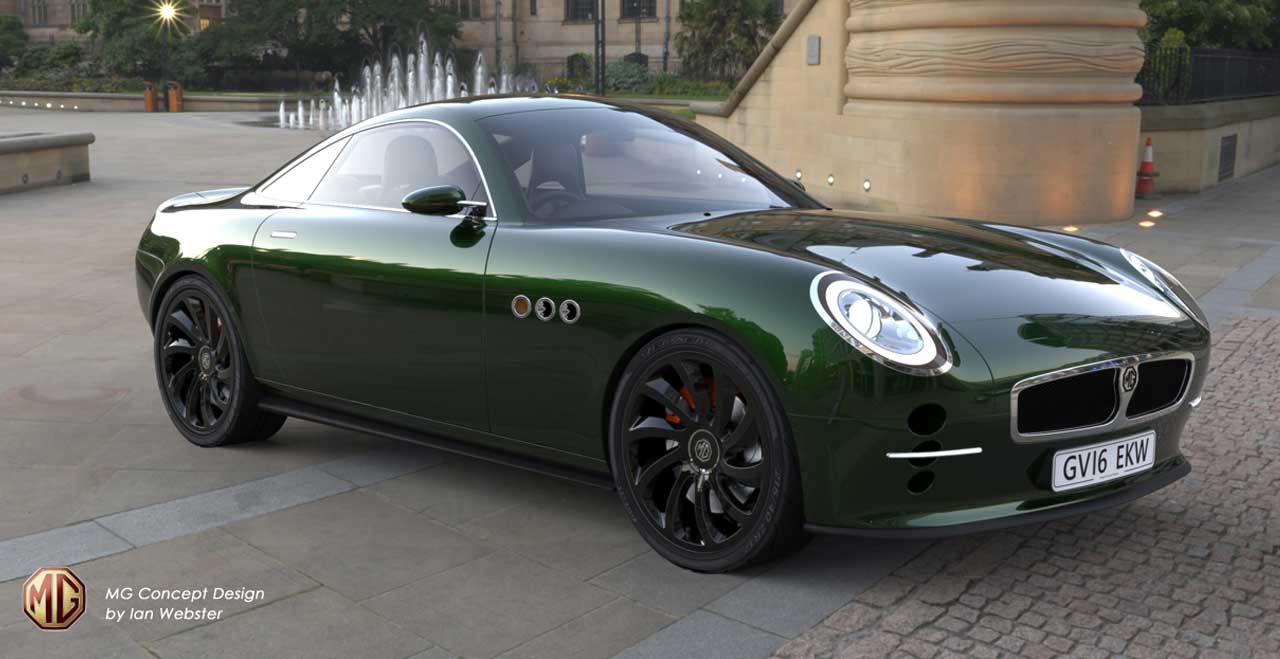 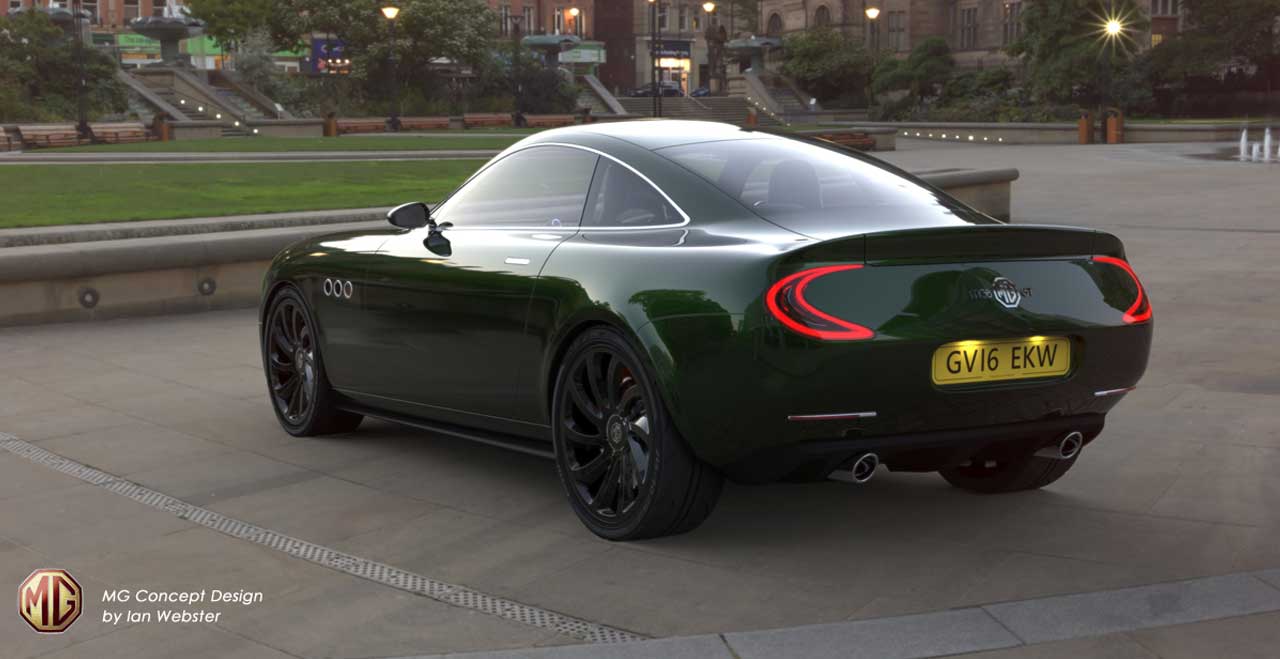 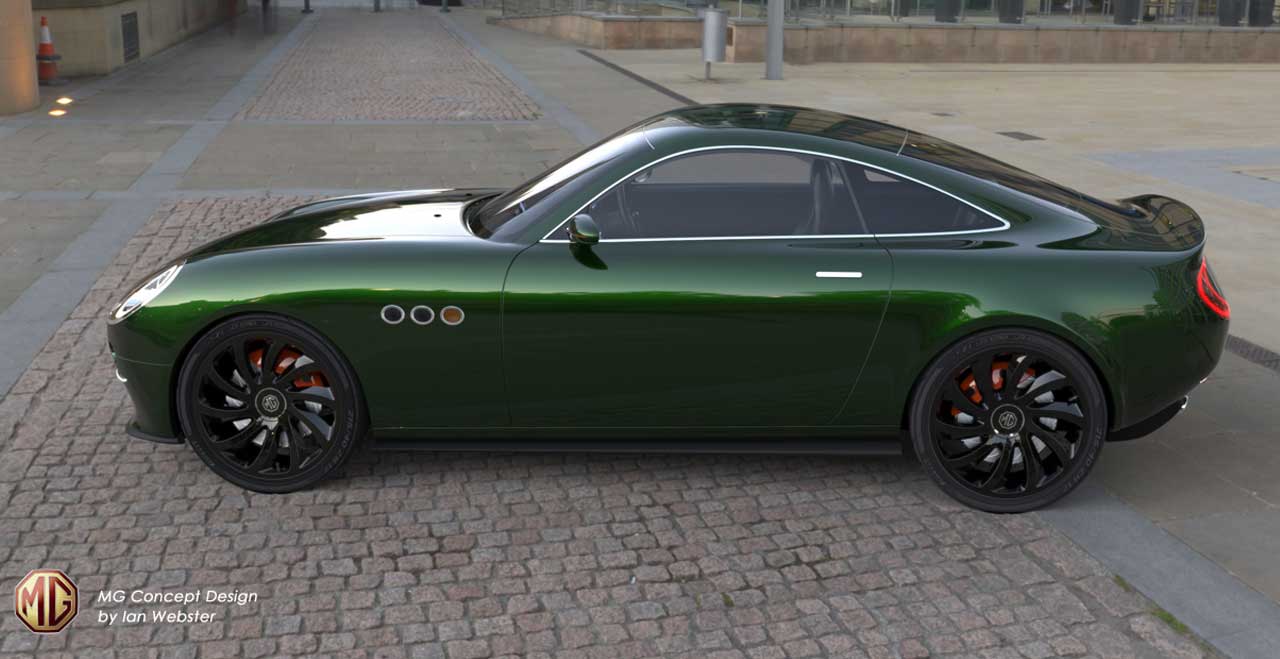 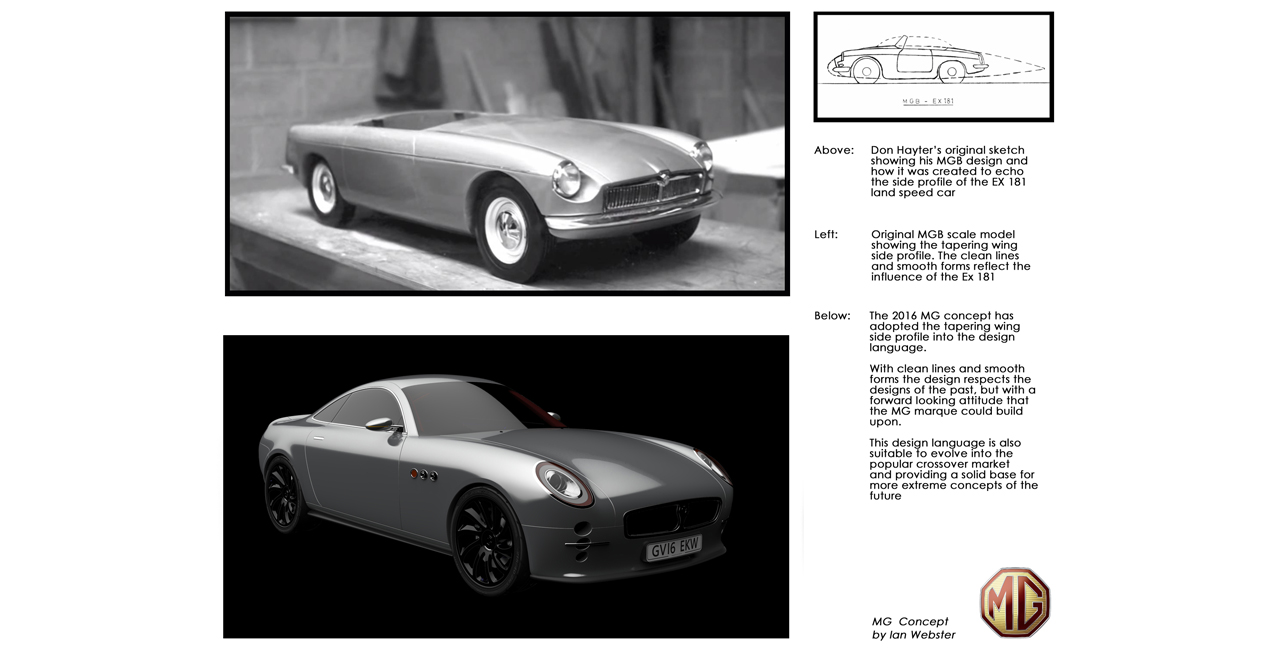 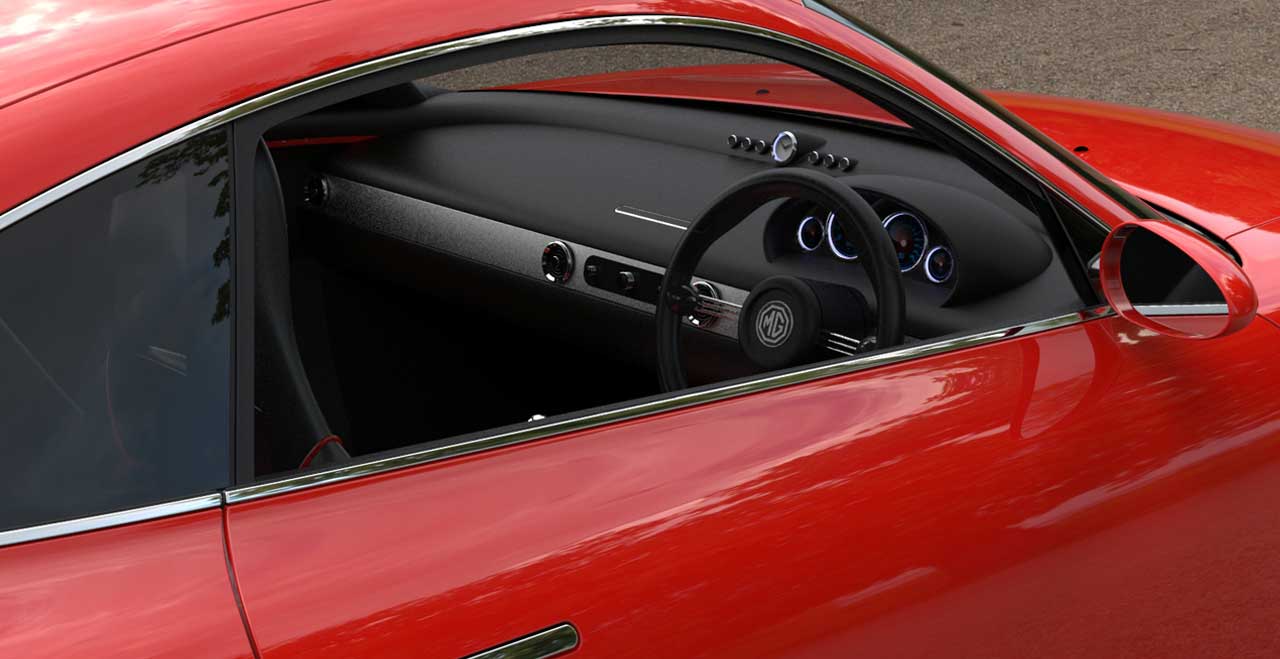 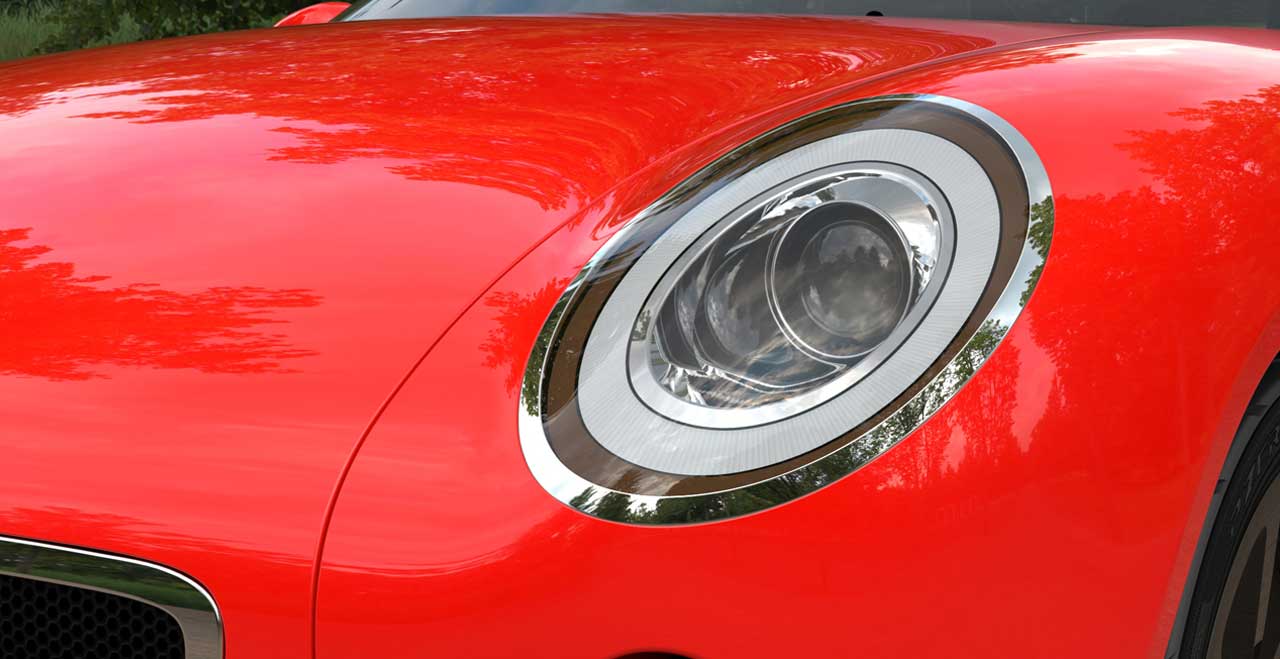 The full article on the MG BGT concept can be found in the July edition of the Enjoying MG magazine.

'What a gorgeous concept car Ian Webster has produced! The Chinese should be falling over themselves to put it into production! Those air inlet ports are fantastic and absolutely true to the Spitfire`s machine gun wing ports'

'Not quite sure about the duck tail and hatchback aperture size, but I still think it`s amazing. Ian Webster is to hugely congratulated'

To see the publication go to MG Enthusiast Magazine.

'Ian Webster’s handsome model surely deserves to go further. Over to you MG…'

This looks great, overall proportions are good and the simple front grille is smart. It would be interesting to see it without the circular side vents, and maybe integrate the door handle, side indicator, any vents and the shut lines for the bumper/bonnet and wing in one crisp clean line, maybe a bit like the Alfa Romeo Disco Volante, but more for function than flamboyance.

Better looking than anything that has come out of China so far; and certainly more true to the marque. An electric or hybrid powertrain would be more in tune with the times than a V8.

Ian, your concept looks really good. I love it.

Looks great. Would love JLR to buy the brand, and use it as entry level sports cars.