The Hurricane concept was originally a concept design for the Light Car Company, run by Chris Craft (former racing car ace, innovative entrepreneur and possibly the nicest chap in the car industry) who along with his friend Gordon Murray created the iconic Rocket road car.

Chris set a brief for a new car that would provide the same exhilarating fun as the Rocket but with the added bonus of providing weather protection by providing an enclosed cabin.

This was all back in 1997 and after being taken around the wonderful Goodwood circuit in a Rocket Ian revelled in creating a car that was perfect for being driven to the Goodwood circuit, burned around for a few laps and then driven home. We think this design still looks as fresh and exciting today as it did back then.

As the automotive world moves more towards autonomous driving then the world of fun-time weekend driving will probably become much more popular, with cars such as the Hurricane providing a great way for auto enthusiasts to enjoy themselves. 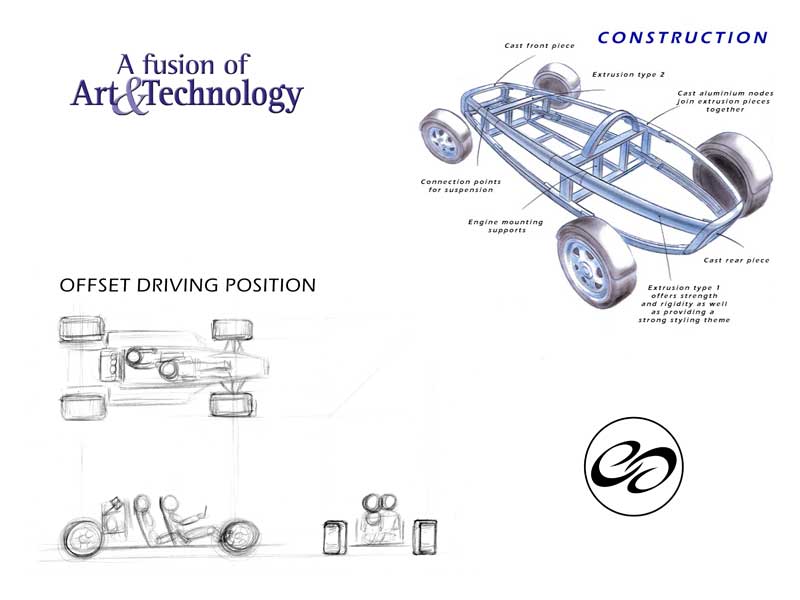 The Hurricane has an offset tandem layout (like a Mclaren F1 but with one of the seats removed), this provides a near central driving position and probably the nearest to an F1 driving experience.

The car has a novel approach to aesthetics because the structure of the car is used as the aesthetic, rather than hiding it away.

Aluminium extrusion and castings are used to create the main structure and this provides an interesting development for car aesthetis in a similar way to modern architecture.

In February 2021 we were saddened to hear that Chris Craft had passed away. Chris was a wonderful character who could turn his hand to just about anything and will be missed by many.

When Chris created the Rocket car with his good friend Gordon Murray, they produced a no-compromise (or very few) design that that was ahead of its time in many ways. Following Gordon's mantra of being light and low - the car still holds the record for the lightest production car at only 375Kg. You can read the full story of the Rocket in Clive Neville's excellent book The Light Car Company Rocket - The Singular Vision of Two Men, (where you can discover the whole fascinating story from a discussion in a hot tub in France in the late eighties, through its development in the nineties by a team of highly skilled artisans, and finally to the refining of the evolved design by Luke Craft in the noughties).

In the mid-nineties and Chris was looking to produce a design that encompassed the driving pleasure of the Rocket with a greater nod to the practicalities of weather protection and making the passenger experience more pleasurable.

Chris invited me to take on these challenges with a carte blanche approach and we explored many seating options before deciding on the offset tandem layout. It was a fun project to work on with Chris and we had several aesthetic themes evolving that were directed by the various manufacturing methods being considered.

When the Light Car Company sadly found itself in financial difficulties Chris encouraged me to develop the design for my portfolio, selecting the design language and manufacturing method that I found most interesting (even if it wasn't the most viable). I chose the one that I evolved into the Hurricane, because I liked the way that the aluminium frame became a strong part of the aesthetics - almost architectural in its design language.

Now that we've reached the 25-year anniversary since Chris first spoke with me about the project, I think a fitting tribute to Chris is the creation of a CCS (Chris Craft Special) version of the design. The world has changed since the Rocket was designed and people are now willing to spend considerably more on their automotive fun. Look at a BAC Mono, with a price of over £160,000 and even a fast Caterham is over £50,000. So, our Hurricane CCS has a much larger budget to play with this time round...

With this in mind we can create our Hurricane with a carbon fibre composite tub, which produces an interesting aesthetic evolution of the original aluminium version. I decided to keep the forms the same because as soon as you start to modify one area, you're going to find that you've redesigned the whole car - and I want to keep the distinctive shape that's aged so well.

So next we need to consider how to power the car and I think that in the current climate it has to be electric.

One of the original Rocket owners made an excellent observation about his car. He pointed out that the car could be so much more malleable in the hands of a highly skilled driver such as Chris or Luke Craft, but in his hands, it was preferable to have more grip on the rear tyres. He adapted his car to suit his driving style and was very pleased with the result.

Taking this point onboard and utilising the positive aspects of electric power we can provide the owner with the ability to distribute the power between the front and rear wheels to their preference. We can also add the ability for the car to have a manual control for how the power is released to the wheels, where the owner can keep it on setting number one when they are travelling to and from the circuit and then wind it up to ten (or possibly a little less) when at the circuit and maximum performance is desired.

These sort of features will add minimal mass to the car while offering significant and variable customisation for the owner, which will lead to a greater confidence and fun factor. I hope that you enjoy the results.

"Having turned our homes into audio zoos with the GT1 Series loudspeakers, Designe may yet have a designs on our drivers and garages.  When asked to take a fresh look at automotive style, the Hurricane is what they came up with. Judging by their previous successs, with it's aesthetics and tandem seating arrangements, we think it might just be crazy enough to get off the drawing board."